summertime, and the livin’ is easy…

The Los Angeles River used to flow through the eastern edge of Griffith Park, that is, until the 5 freeway split the park in two. Now the river flows next to the freeway and sometimes I wonder what species that depend on the river think about this…

Yesterday was amazing… the river was teeming with wildlife of all sorts. In one area I counted five egrets and several cormorants (one spreading its wings as we walked by). While we tried to step quietly along the walkway, we still startled several blue herons and egrets and they decided to take to the skies. However, as we turned back toward our car, I saw movement down near some shrubbery and realized I’d managed to capture a juvenile night crowned black heron hanging out on a rock along one of the islands.

A beautiful sunset made the islands look especially glorious on the way back. (But just don’t go into the water!) 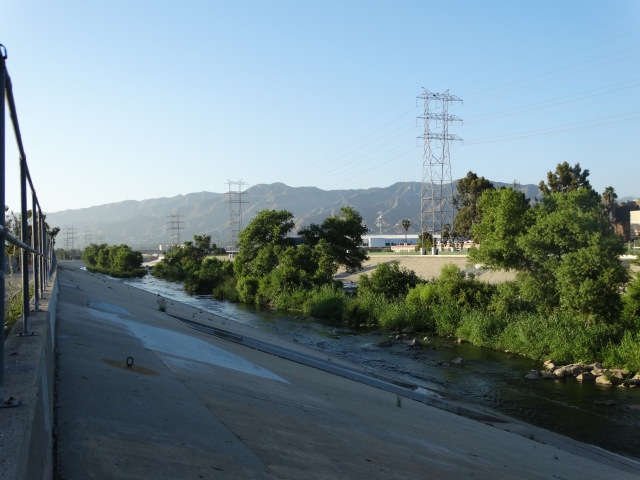 spring along the drive 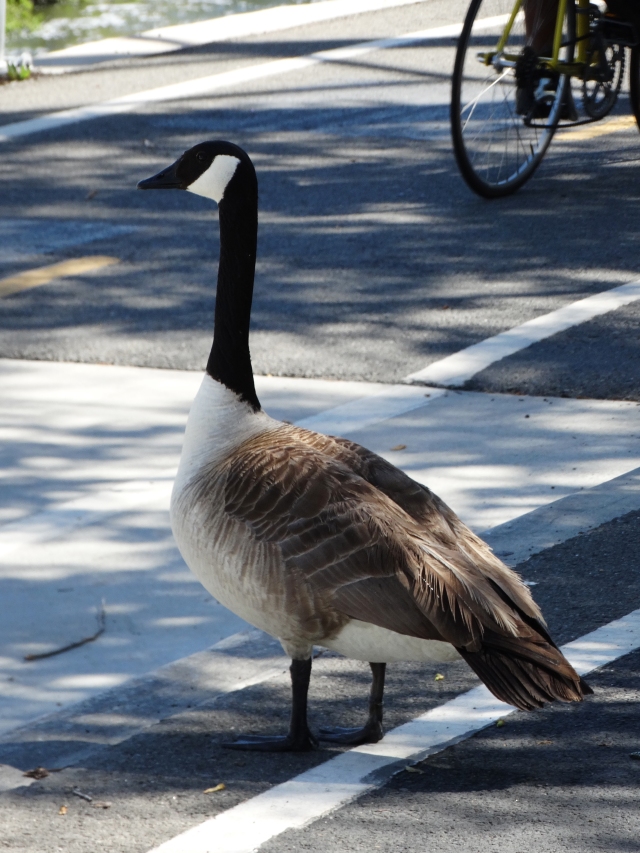 Yesterday was a day to go outdoors and enjoy the sights… along the route I noticed this Canada Goose standing at the edge of the pedestrian/bike path like he was holding court. I took a few pictures from the right side and since he wasn’t moving, decided to try my luck from the left… which I did after slowly moving behind him. Hard to tell, but he did not take his eyes off me, even as a bike tooled by… Eventually I left him to his devices and walked back to my car.

While many in the area consider these guys to be a nuisance, they are quite handsome in person with the regal black/white coloration on their head and neck. And, although the Los Angeles River used to be a stop along their migration route, they’re spotted more and more down at the river (and sometimes in Griffith Park on the golfcourse). Just about now (springtime), they usually have one or two young in tow as they swim, or graze.

The Black Phoebe (Sayornis nigricans) spotted next to the LA River just above Atwater Village. According to The Cornell Lab of Ornithology allaboutbirds.org/guide/Black_Phoebe/lifehistory this is a “dapper flycatcher” that scans the surrounding area for insects… they’re very petite, and usually spotted down near the water around sunset.

These photos were taken over the last few months… 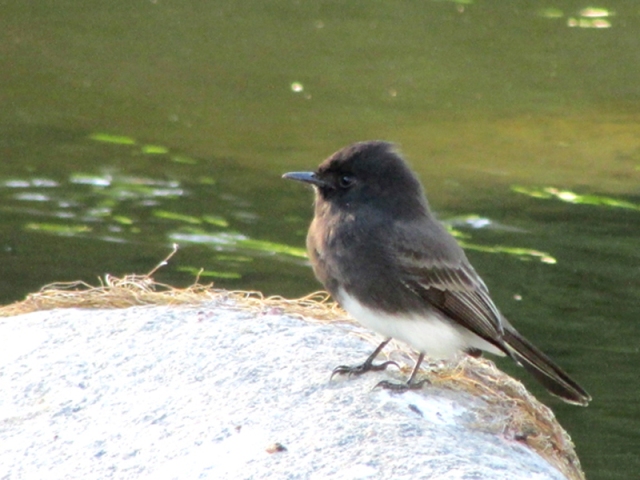 the heritage sycamore and crystal springs

Posted on October 1, 2014 by eastcoastone

Earlier this month a protest was held in Crystal Springs to protect a Heritage Sycamore (and other native tree species including Black Walnuts and Live Oaks) slated for demolition by LA Rec & Parks in order to build two little league-style baseball fields. This move by the city would have effectively destroyed a beautiful, bucolic picnic/passive recreation area currently used by many Angelenos during the course of the year.

For many living in LA sans backyards, the Crystal Springs area in Griffith Park provides a beautiful vista in which to celebrate picnics, graduations… whatever the occasion… this area provides the perfect venue for parties and many forms of passive recreation.

So, why destroy it?

According to recent studies analyzing available parkland in the City of Los Angeles… “low-income and concentrated poverty areas as well as neighborhoods dominated by Latinos, African Americans, and Asian-Pacific Islanders, have dramatically lower levels of access to park resources than white dominated areas of the city.”

And although Proposition K funds (the 1996 bond measure) are supposed to increase/enhance parks and recreation spaces in LA, the opposite is occurring in poorer communities. Meaning those communities are losing out on funding and access to green spaces. According to the study… “neighborhoods with the largest shares of young people received half as much Prop. K funding on a per youth basis than areas with the least concentration of youth.”

At the same time, “districts with the highest rates of park accessibility received as much or more bond funds than many areas with higher poverty, higher concentrations of young people, and below average park accessibility.”

Which seems to indicate that those with higher finances will have greater access to the representatives down at City Hall and in turn, will see a greater positive impact from the distribution of parkland in Los Angeles.

But part of the problem with Los Angeles… it’s a city that has never set aside adequate green space for its increasing population, and now it depends solely on existing green space to fill its needs, which given the magnitude of LA, no longer work.

This is like taking a pie and cutting it up… even though there are more coming to the table, the pie is shrinking, and as a result, the remaining pieces are getting smaller and smaller.

I believe Griffith J. Griffith in his bequest to the City said it best about Griffith Park… “It must be made a place of recreation and rest for the masses, a resort for the rank and file, for the plain people… I consider it my obligation to make Los Angeles a happier, cleaner, and finer city. I wish to pay my debt of duty in this way to the community in which I have prospered.”

Even though fairness has never been part of the equation down at City Hall, we must demand better from our elected officials and leave existing parkland alone.

Currently, there is a lawsuit pending that would halt construction of the baseball fields and also demand that other options be placed back on the table so as not to destroy existing recreational facilities utilized by other groups. The city has been surprisingly dismissive… especially when discussing the Park… Griffith Park, that is…

“Campers can decide how extreme of an experience they get by their choice of activities. Certain tent sections or activity zones labeled as “Chicken Zones” will be milder while everything else keeps campers “FAIR GAME.”

Should you find that you just can’t take anymore or feel a little dribble of urine heading down your inner thigh, you can always shout the safe phrase “I WANT MY MOMMY.”

GHC is suitable for adults 18 and over The experience begins at 8pm.

There will be suitable time for sleeping, however the residents of the woods never sleep.

Here’s the $64,000 question… is this really an appropriate venue for the Old Zoo (or any city park for that matter)?

Griffith Park is defined as an Urban Wilderness area, meaning it’s exceptionally bio-diverse… inhabited by a broad range of plants and animals. And thanks to Ten Thirty One none of the wildlife in the immediate vicinity of this event will be allowed to sleep…

And what makes the Old Zoo unique in the larger Griffith Park? This area is occupied by at least 11 different bat species (so far) as well as a gray fox population and various other species, like coyote and bobcats.

Los Angeles should embrace what already exists, especially the largest urban wilderness in the country, but given the historical track record of this exceptionally park-poor city, LA probably won’t do the right thing.

Why do you suppose this is?… Because Los Angeles seems more interested in selling/renting off resources, and what better resource than Griffith Park… for sale or rent to the highest group of bidders…

Ironically, other cities throughout the US have embraced the concept—going so far as to reintroduce “urban wilderness” features into their landscapes—cities like New York and Portland, Oregon.

Today Los Angeles kicked off the LA River Revitalization Plan, thanks to the ongoing efforts of Friends of LA River (FoLAR) and a generous infusion of funds from the federal government.

As we celebrate this auspicious event, we should also look at Griffith Park with the knowledge that this Park (and other city parks) should be preserved for future generations to enjoy… However, it seems at every turn, the city is bent on destruction of the natural, beautiful areas created by city parks.

Wildlife at the LA River is much more abundant in the early morning or late in the afternoon, so if you’re really interested in seeing some gorgeous waterfowl… this is the perfect time to catch ‘em.

That said, I was on the hunt for some decent photos… the first thing I saw when I came to the river was a beautiful blue heron close to the shoreline so I paused for a while and got some great shots.

As I moved up the river, toward Burbank, I saw a juvenile black-crowned night heron who seemed as curious to what I was doing as I was curious to what the bird was doing. The river acted as a buffer, so the bird and I managed to maintain our distance. I kept moving north to get a better shot, but the bird kept moving with me, so I never got to see the backside…

Nevertheless, I felt it was a successful time spent along the river!

along the la river — early may

In fact we saw several in the same general vicinity yesterday, but they were scared off by a couple of people walking their dogs off leash [which given it’s early spring and there are a number of unhatched duck eggs or ducklings…] is a bad thing.

And I must add… these birds are really quite magnificent close up and personal.

A great sight indeed… people from all walks of life show up on one day a year to help clean up the Los Angeles River.

This is the 25th year that the Friends of Los Angeles River have undertaken this Herculean task, and the rewards of this cleanup are seen in many faces as people exit Bette Davis Park. The Friends of Griffith Park once again hosted the Davis Park event.

Today, the river is a whole lot cleaner due to the efforts of a great many folks. 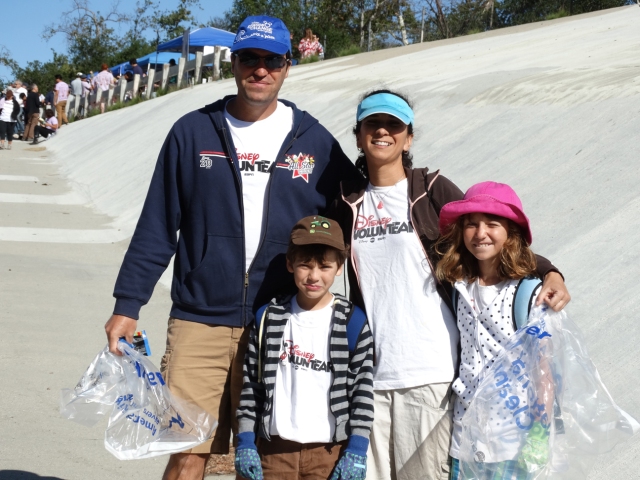 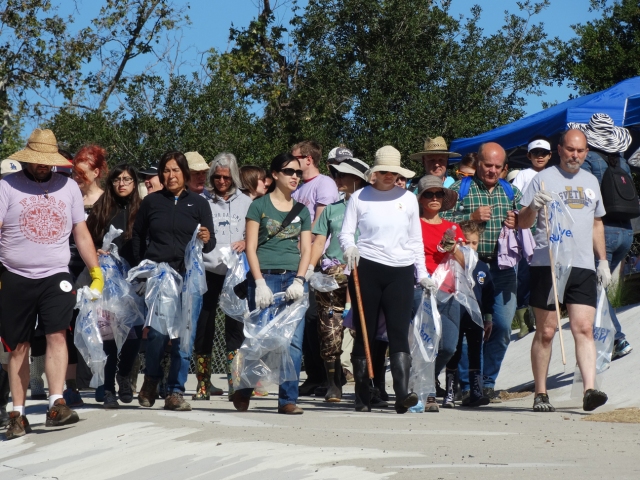 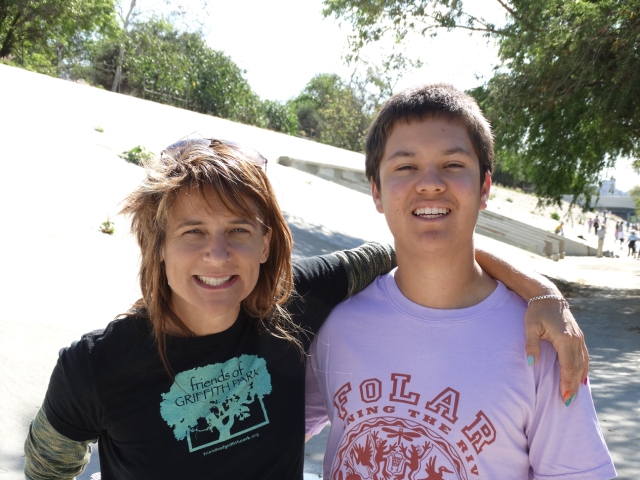 view from the river

In a few short weeks FOLAR (Friends of Los Angeles River) will be conducting their annual LA River cleanup… this being the 25th year since the inception of these cleanups.

The efforts of city dwellers flocking to the river in droves to strip trees of plastic bags, islands of debris, and the river bottom of shopping carts and hub caps are greatly appreciated by FOLAR and those who walk, bike or even canoe along the river.

Cactus blooming on the western edge of Griffith Park…

Posted in Uncategorized | Leave a comment
view from griffith park
Blog at WordPress.com.